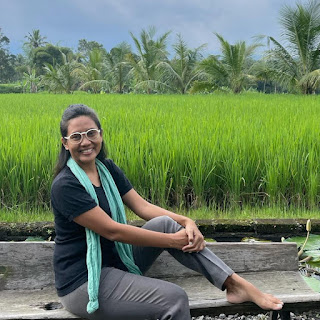 Dear gentle readers, you may see Dewi “Little Garden” as polite as Kartini and brave in actions like Srikandi. She is the figure whom Ardhi Widjaya & Co met on a drizzly afternoon at Warung Jembarati, where she serves plant-based menus from her “Little Garden” kitchen. For her, architecture is an adrenaline rush, but plant based foods is her passion in life to develop this culinary business.

At the beginning of their final year of college, Dewi and her husband, who was still a potential husband to be at that time, started to build the Banyu Bening Deco, a business for architectural and interior design & furniture services. The business was developed by the two of them to prepare for the wedding expenses. However, as the business progressed, because at that time it received a lot of criticism, so Dewi tried to find opportunities for other businesses while still carrying out her architectural services.

In order to achieve satisfaction for the work she made, after marriage, Dewi and her husband  buy land at Sleman-Yogyakarta and design the architecture of their own property. Dewi asked her husband to conceptualize a house design with a "warung" area. Dewi's husband agreed and at the same time advised her to make food that they could enjoy without feeling anxious by using non-manufactured ingredients instead.

Dewi then made a menu that was considered "healthy" but when she met Bapak Wied Harry, she got a lot of input on how to standardize healthy dishes. At that time, Dewi still used fish and meat in her processed menus. Later in its development, many vegan consumers came to eat Dewi's concoction menu. Since Dewi knew that there was a lot of vegan culture in Bali, Dewi, who named her culinary brand “Little Garden”, had a comparative study in Bali and met Bapak Made Runatha and saw how big the potential of vegan food in Bali. 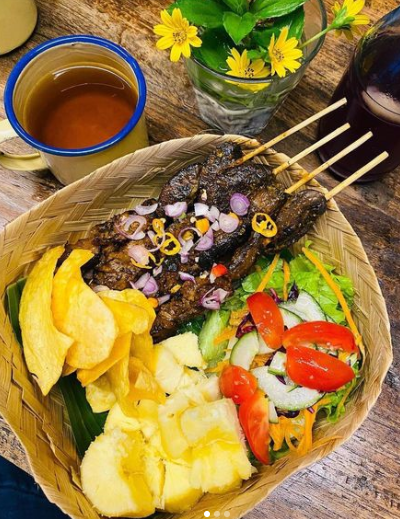 Namaste Satay, a vegan signature dish by Little Garden kitchen
Since 2015, Dewi has brought Little Garden to focus on plant based foods and the market response has been very good. The rapid development of Little Garden made her husband participate in this healthy culinary industry and disabled Banyu Bening Deco architectural services since 2017. When management was assisted by her husband, Little Garden was better managed and delegated quite well to the team. This makes Dewi to feel the need to explore her competence so she doesn't feel bored. 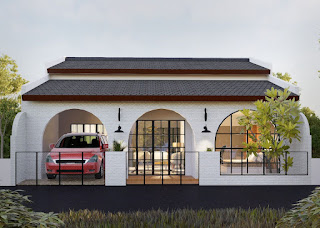 One of Dewi brava creation in architecture design

Moreover, in mid-2021, heavy rains caused Dewi and her husband's house to suffer some damage and had to be renovated. Dewi then took the initiative to contact her colleague who is a contractor and Dewi designed the architectural renovation of her own house. Unexpectedly, at the end of 2021 there were colleagues who were also interested in making architectural designs so that Dewi be able to handle. Since then Banyu Bening Deco has bounced back with Dewi as the vanguard and Little Garden takes her husband as an Avant-Garde.